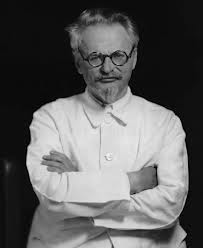 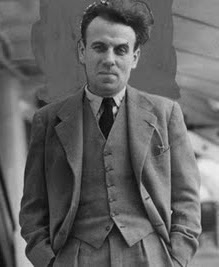 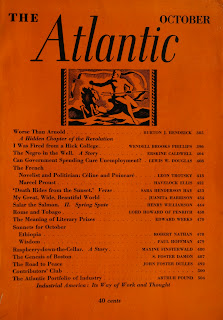 Louis-Ferdinand Céline walked into great literature as other men walk into their own homes. A mature man, with a colossal stock of observations as physician and artist, with a sovereign indifference toward academicism, with an extraordinary instinct for intonations of life and language, Céline has written a book which will survive, independently of whether he writes other books, and whether they attain the level of his first. Journey to the End of the Night is a novel of pessimism, a book dedicated by terror in the face of life, and weariness of it, rather than by indignation. Active indignation is linked up with hope. In Céline's book there is no hope.
(...)

Céline, the moralist, follows the footsteps of the artist, and step by step he rips away the halo from all those social values which have become highly acclaimed through custom, from patriotism and personal ties down to love. Is the fatherland in danger? "No great loss, when the landlord's house burns down.... There will be rent to pay just the same." He has no use for historical criteria. Danton's war is not superior to Poincaré's: in both instances the "patriotic function" was paid in the coin of blood. Love is poisoned by selfishness and vanity. All forms of idealism are merely "petty instincts draped in highfaluting phrases." Even the image of the mother is not spared: on meeting her wounded son "she squealed like a bitch whose pup had been restored. But she was lower than a bitch because she had faith in those syllables she was told in order to deprive her of her son."

Céline's style is subordinated to his receptivity of the objective world. In his seemingly careless, ungrammatical, passionately condensed language there lives, beats, and vibrates the genuine wealth of French culture, the entire emotional and mental experience of a great nation, in its living content, in its keenest tints.
And, concurrently, Céline writes like a man who has stumbled across human language for the first time. The artist has newly threshed the dictionary of French literature. Pat expressions fly off like chaff. And, instead, words that have been excluded from circulation by academic aesthetics and morality become irreplaceable to give expression to life in its crudeness and abjectness. Erotic terms serve Céline only to rip the glamor from eroticism. He operates with them in the same manner in which he utilizes the names of other physiological functions which do not meet with recognition on the part of art.
(...) 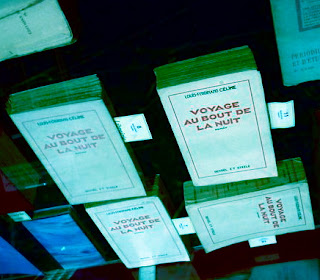 Against the background of the "abject spectacle of parliamentary intrigues and financial scandals"—to usePoincaré's expression—Céline's novel attains a twofold significance. Not without cause did the well-meaning press, which in its own time was wroth with the public investigation, immediately damn Céline for calumniating the "nation." The parliamentary committee had, at any rate, carried on its investigation in the courteous language of the initiated, from which neither the accusers nor the accused departed. But Céline is not bound by convention. He rudely discards the gratuitous colors of the political palette. He has his own colors. These he has ripped from life, with the artist's privilege.
True, he takes life not in its parliamentary cross-section, not on the ruling heights, but in its most prosaic manifestations. But this does not ease matters any. He bares the roots. From underneath the veils of decorum he exposes the mud and blood. In his ominous panorama, murder for the sake of trifling gain loses its extraordinariness: it is just as inseparable from the day-to-day mechanics of life, propelled by greed and self-seeking, as the Stavisky affair is inseparable from the much higher mechanics of modern finance. Céline shows what is. For this reason he appears as a revolutionist.
But Céline is no revolutionist, and does not aim to be one. He does not set himself the goal of reconstructing society, which is chimerical in his eyes. He only wants to tear away the prestige from everything that frightens and oppresses him. To ease his conscience from terror in the face of life, this physician of the poor had to resort to new modes of imagery. He turned out to be the revolutionist of the novel. Generally speaking, that is the law governing the movement of art: it moves through the reciprocal repulsion of tendencies.
Decay hits not only parties in power, but schools of art as well. The creative methods become hollow and cease to react upon human sensibilities—an infallible sign that the school has become ripe enough for the cemetery of exhausted possibilities—that is to say, for the Academy. Living creativeness cannot march ahead without repulsion away from official tradition, canonized ideas and feelings, images and expressions covered by the lacquer of use and wont. Each new tendency seeks for the most direct and honest contact between words and emotions. The struggle against pretense in art always grows to a lesser or greater measure into the struggle against the injustice of human relations. The connection is self-evident: art which loses the sense of the social lie inevitably defeats itself by affectation, turning into mannerism.
The richer and more solid is national cultural tradition, the more abrupt is the repulsion from it. Céline's power lies in that through supreme effort he divests himself of all canons, transgresses all conventions. He not only undresses life's model, but rips her skin off. Hence flows the indictment of calumny.
But it is precisely in his impetuous radicalism of negating the national tradition that Céline is deeply nationalistic. Just as the French anti-militarists prior to the war were most often desperate patriots, so is Céline a Frenchman to the marrow of his bones, a Frenchman who has torn himself loose from the official masks of the Third Republic. Célinism is moral and artistic anti-Poincaréism. In that is Céline's strength, but, too, his limitation.
(...) 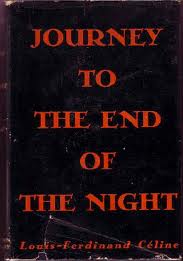 Only because there are numerous and well-paid priests serving the altars of false altruism does Céline turn away from greatness of mind and heroism, from great projects and hopes, from everything that leads humanity out from the dark night of the circumscribed I. It seems almost as if the moralist who is so ruthless to himself had been repelled by his own image in the mirror, and smashed the glass, cutting his hands. Such a struggle may enervate, but it does not break out toward the light's glimmer. Hopelessness ever leads to docility. Conciliation opens the doors to the Academy. There has been more than one previous occasion when those who have blasted the literary foundations ended underneath the dome of immortality.
In the music of this book there is a dissonance pregnant with much meaning. By rejecting not only the present but also what must take its place, the artist gives his support to what is. To that extent Céline, willy-nilly, is the ally of Poincaré. But, exposing the lie, he instills the want for a more harmonious future. Though he himself may consider that nothing good can generally come from man, the very intensity of his pessimism bears within it a dose of the antidote.
Céline, as he is, stems from French reality and the French novel. He does not have to be ashamed of his ancestry. The French genius has found its unsurpassed expression in the novel. Beginning with Rabelais, likewise a physician, there has branched, in the course of four centuries, a splendid genealogy of the masters of epic prose: from life-loving belly laughter down to hopelessness and despair, from the brilliant break of day to the depths of night.
Céline will not write a second book with such an aversion for the lie and such a disbelief in the truth. The dissonance must resolve itself. Either the artist will make his peace with the darkness or he will perceive the dawn. 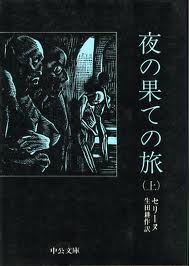 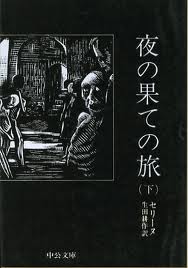